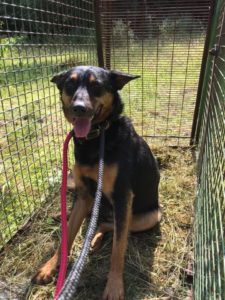 Fred (now renamed Jack) was missing for five nights after escaping his new home in Chapelknowe, Canonbie, on Sunday (July 26). He had just arrived from Wales, didn’t know the area or his new owner.

After an adventure that saw him travel miles over fields and visit several farms, he was secured by the Lost Dogs Dumfries and Galloway team. We couldn’t have done this without the incredible support from the local community and friends and neighbours of Jack’s new owner, Harold.

This was a particularly tricky situation as Jack was so unfamiliar with everything around him, but being a failed farm worker he stuck to what he knew, farms. We managed to secure him in an area we worked out he was using to move between locations. When he arrived at the trap, he was in it and safe in less than 2 minutes.

A huge thank you to “everyone” who helped in getting Jack secured and safe – including everyone who shared his appeal, who didn’t call him or chase him and just called in the sightings. You all did this! Thank you